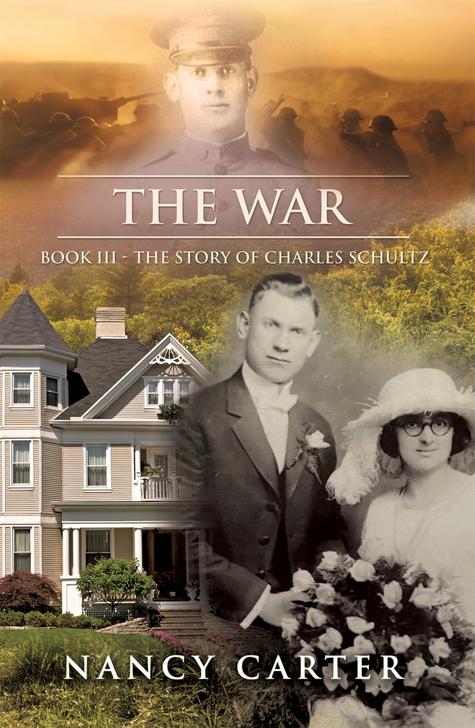 THE WAR- BOOK III- THE STORY OF CHARLES SCHULTZ

A WORK OF CHRISTIAN HISTORICAL FICTION/NONFICTION ABOUT THE

"Where in the world are you, Charlie Schultz?" he whispered to himself, as he stood on guard duty looking into the dark. I wanted adventure, but I never thought I'd be such a far cry from West Virginia, half-way around the world! His mind began to fill with thoughts of home, then it drifted to thoughts of Alda Mae Jeffers. Charlie wondered if what she had written in her letter was all lies. While trying to remember what she had written he suddenly heard footsteps in the dark woods that alerted him to snap into the moment. Charlie aimed his rifle towards the sound. He prayed that it was friend and not foe.

THE WAR, is set in war torn areas of France and Germany in 1917. It is the third book in a Christian Historical Fiction/non-fiction Series that continues the story of the life of Charles Schultz.  It brings to life the story of a war and a period of time that has long been forgotten, but needs retelling to remind us that this was a war that freed millions of people from world dominance. It truly was, "The Great War."

Charlie, along with thousands of other soldiers, was stationed in an army camp in France, training to enter the war.  The camps operated similar to US army posts: drills, training, and even issuing passes to soldiers. Many times soldiers with passes got into trouble when away from the camp. Charlie and his buddies were no exception. They often found themselves ducking and running to keep immoral women and shady men from taking advantage of them, even in Paris.

Before the time came to actually enter the battlefield,  Charlie volunteered for special assignment in No Man's Land.  After being trained to do many undercover stealth operations, Charlie did things he never thought he was capable of doing, to save solider's lives.  In a massive push to end the war, Charlie is sent on his most dangerous mission and nearly loses his life.

After returning home from the war to West Virginia Charlie's faith is tested by the changes which happened at home and in France that made him a different man.  Working as a street car conductor in Washington, D.D., he meets a girl from Paris and is railroaded into marriage.  When she mysteriously turns up dead, Charlie decides to 'let sleeping dogs lie'.

Eventually, Charlie reenlists in the army and is sent to Fort Rodman, Massachusetts.  After finally getting his life together, seven years later it all comes undone and threatens to tear his life apart.